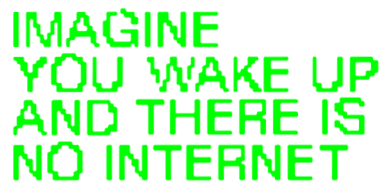 Towards a Weaponised WWW Infrastructure (2020)

“Lots of us thought we were building a new world, an “information superhighway,” a virtual destination that would improve all things — remember the promise of those early web icons, all of which looked like compasses and maps? We were going to be navigators. Yet somewhere along the way, we just ended up enriching Silicon Valley companies with all of our personal content and our shares and our likes, and now have nothing to show for it but a gaping hole in our privacy big enough for petty bullies and political enemies alike to drive a truck through. We still say “IRL” to distinguish between talking to people digitally and talking in person, but the fact is the internet became the primary site of real life, sometime when we weren’t looking.” Excerpt By Leigh Alexander from “2016: The Year the Internet Became Real” article on nymag.com

No Más / No More are somewhat skepticists on the thought that there won’t be a day that we wake up and the internet will be gone. The Internet has now been translated to corporate and governmental infrastructure. No Más / No More an are.na archive containing found and new material scattered across the web showcasing the internet’s demise and transformation from a potential information superhighway to a sluggish, buggy, corporate, boring and sterile group chat.

No Más / No More is a studio focusing on design, photography and art direction. Particularly interested in the intersection of all three and the in-between zone they all co-exist and how evidently they co-operate, or how brutally they collide. Co-founded and operated by Spiros Kokkonis and George Roussos since 2018.